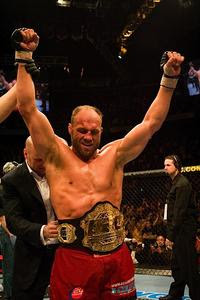 And your excuse for why you are not stronger or biggeer or leaner or a better athlete is because you are… too old? How sad and pathetic you must be.

Last night was like watching a real life version of Rocky Balboa and the only way not to be motivated by it was if you slept through the fight.

Sylvia was the odds on favorite against the older Couture yet he was completely dominated from start to finish. Randy trained his ass off in preparation for this fight and entered the octagon in the best shape of his life.

Sure, we all don’t have the luxury of being able to do nothing but train, eat and sleep like many pro athletes do but to use that as an excuse is unacceptable. To use age as an excuse is beyond unnaceptable.

I can’t tell you how many times I have heard the age excuse used. And every time I hear it, it makes me sick. I once had a client who came to my gym to train at the same time as a particular group of high school kids. The kids were significantly stronger than him on every exercise they did. He used to look on in awe and tell me, “there’s no way I can compete with these high school guys, I’m way too old for that.”

He was 34, and I was completely nauseated by his statement. Being the politically incorrect straight shooter that I am, I immediately snapped at him, “You have got to be kidding me, right? You’re using age as an excuse at 34?! ? You should be ashamed of yourself. They should be saying there is no way they can compete with you because you should be dominating them. ”

I couldn’t look at him for the rest of that workout without wanting to throw up.

I had another client around the same time who displayed the exact opposite attitude and proved what’s possible when you don’t set limits or make excuses. Mark Crook hired me to train him shortly after his 41st birthday. He had barely touched a weight in his life up until that point but was determined to get in shape and give it his all. Once he got a taste of the intense training atmosphere in my gym he was hooked and wanted nothing more than to dominate everyone in his path. He set his sights on some of the young bucks who were significantly stronger than him and vowed to outlift all of them within a year.

With determinatinon, laser sharp focus and ample amounts of hard work Mark went from barely being able to bench press 135 to easily handling 275 in his first year at my gym. In the process he left many of the younger guys who were benching 50-100 pounds more than him when he started, in the dust. Mark went on to become a very good friend of mine and still trains hard to this day. Not once in the entire time that I have known him did I ever hear Mark mention his age and use it as any kind of excuse.

I have another good friend from Arkansas named David Larkan who is one of the most inspiring people you will ever meet. Dave is close to 50 years old and still plays in a wide variety of semi professional sports leagues and trains as hard as anyone I know. I received a phone call from him recently and he told me that despite the numerous injuries he has accumulated over the years he had decided to go back to playing semi pro FOOTBALL for one last season and wanted to know if I could help him get in shape for his last hurah.

In case you missed it, Dave is nearly 50. What’s your excuse again?

Why do some people think that the day you graduate college your ability to do anything physical is automatically rendered useless? It is assumed by a large portion of the population that after college you have to get serious about life and grow up. This usually means giving up sports, sitting in front of a computer all day, getting in terrbible shape, taking up golf and basically turning into a complete pussy. Intense physical activity and competition is beneath them apparently.

Get over it and start living.

I recently saw some friends from high school and they confessed that they have not done much physical activity since we graduated fifteen years ago. It showed.

On the other hand, I am a far better athlete today, at 32 then I was back then at age 17 and I am only getting better. Unlike many of my contemporaries, I refuse to stop.

But I’m still young so some of the older guys will use that as an excuse. “You’re still in your thirties, wait til you get to be forty, then you’ll see.”

Well then what about Brett Favre, still playing at close to 40?

Ric Flair is still wrestling a full time schedule and taking bumps off the top rope and steel chair shots in his mid 50’s.

Louie Simmons is still powerlifting with the best of them in his 60’s.

And Randy Couture just competed in the most physically demanding sport on earth last night and won the world heavyweight championship at age 43.

Now tell me one more time, what’s your excuse?

Underground Training Interview with Zach Even-Esh
Age is No Excuse