Training Legs with a Bad Back, What Are “Effective Reps,” & Recommended Natural Grooming Products – Episode 382 On this week’s Q&A episode we cover training around injuries, building muscle, nutrition, music, grooming and more.  I also give a brief explanation of how and why I ended up moving out of LA and down to Austin. And then out of Austin to our new temporary home.  Grab your headphones (preferably with a wire to avoid EMF’s!), take the dogs for a walk (or go adopt one) and enjoy.  Scroll Down for Show Notes: Click here to subscribe via iTunes… continue reading.

My Biggest Training Mistake Ever, and What Scares Me Most – Episode 349 We’ve got a listener Q&A episode of Renegade Radio this week where we discuss training volume, frequency, intensity, recovery, my biggest mistakes and much more.  Then I address the importance of “packaging and presentation,” and how to show up every day as a superstar worthy of getting paid a million dollars an hour.  Finally, I share some deep thoughts and life lessons on what we should all strive to avoid.  Scroll Down for Show Notes: Click here to subscribe via iTunesClick here… continue reading. Today we’ve got another listener Q&A for you to enjoy while in quarantine… or on vacation. Depending on where you fall on the fear/science/political spectrum.  Who knows where anyone is or what’s going on anymore?  One thing I do know is that clangin n bangin heals what ails you.  Scroll Down for Show Notes: Click here to subscribe via iTunesClick here to listen on So… continue reading. This week we have another quarantine Q&A solo episode. Hopefully this will provide you with some entertainment, quality info and the knowledge you need to keep getting jacked, strong and lean during these challenging times. Listen as I answer your questions on training, nutrition, books, mentorship and more. Scroll down for Show Notes: Click here to subscribe via iTunesClick here to listen on SoundCloudClick here to subscribe via Stitcher… continue reading. 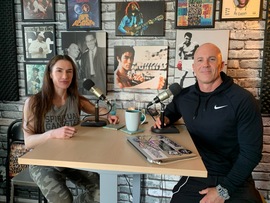 Pauline Nordin has an incredible and inspiring transformation story. As a teen she struggled with body image and eating disorders. At one point she weighed an extremely low 85 pounds. Her life took a turn for the better when she started going to the gym. Motivated by the fitness models she saw on magazine covers, she took control of her life through fitness and proper nutrition. Within only three years of training, she not only transformed her physique, but she also became a fitness athlete and competitor. She won her first show at the age of 20. continue reading.

Maximize Your Body and Life with Bobby Maximus – Episode 313 A lot of people say they don’t want to be average but it’s a rare breed of man that lives their life like it’s their mission to destroy mediocrity. Bobby Maximus, my guest in this episode of Renegade Radio, is one of the few. He’s a former police officer and Defensive Tactics Instructor. He has competed in the UFC, won submission of the night at Ultimate Fight Night 5, starred on Spike TV’s The Ultimate Fighter Series, and was the Ring of Fire light-heavyweight champion. He has also served as General Manager at Gym Jones, an elite… continue reading.

The #1 Limiting Factor in Your Training, Do you Need to Squat & Deadlift, IIFYM or Keto, Balancing Fitness & Life – Episode 287 Another solo Q&A episode coming at you this week. Pay extra special attention to what I’m spittin in the first and last answer. There’s a few tidbits in there that could make a huge difference in your training, your results, your recovery, and your overall enjoyment of life. Keep sending the awesome questions my way and I’ll keep answering. Thanks. Scroll down for show notes: Click here to subscribe via iTunes Click here to listen on SoundCloud Click here to subscribe via Stitcher Right-click here… continue reading.