What a difference five years makes. I go out to bars about three times per year instead of three times per week. I hate staying up late and drinking these days, preferring instead to stay home, read a book and be in bed by 10:30.

I’ll hardly touch a piece of food that isn’t organic or 100% natural. I’ve gotten rid of my microwave and toxic pots, pans and food storage containers. I only drink the purest water I can out of Sigg bottles, and even have a filter on my shower head.

I threw out all my regular sun screens and soaps and whatever other harmful crap I had in the house. Basically, I’m an absolute health nut like the bodybuilders and strongmen of the early 1900’s. I know it sounds crazy to associate bodybuilders with health but that was actually the case way back when.

My life has changed drastically in the last few years with all of the above paling in comparison to the biggest change.

After college my obsession with strength training and fitness was growing at an astronomical rate. So much so that it really cut into my social life. There was a few year period where I barely went out and only drank a handful of times each year. That’s because I was too busy studying, training people and training myself. Plus, as a skinny punk who was trying to gain fifty pounds I really didn’t need the late nights and booze. I was dedicated to achieving my goal and wasn’t going to let anything stand in my way.

A few years later I had gained the fifty pounds I was after and decided it was time to start having some fun again. I realized that I could be letting some of the most fun times of my life slip by, so I started partying pretty hard. I’m an all or nothing kinda guy so it goes from one extreme to the other with me.

By the time I hit thirty I was working my ass off at the gym every day for 10-12 hours, seeing 50-70 clients regularly, training my balls off and partying like a rock star on weekends… and Tuesdays… and Thursdays. Eating healthy was always a secondary concern to eating for size, strength and performance. Which, knowing what I know now, makes no sense, but that’s where my head was at throughout my twenties. And just because of my rebellious nature, if every other fitness expert was recommending a protein shake followed by chicken, broccoli and brown rice after a workout I was going to eat a pizza, drink a Gatorade and follow it up with a few beers. During the summers I would actually pride myself on being able to drink a dozen Red Bull and vodkas at a bar down the shore on a Thursday night, sleep no more than four or five hours and still be able to compete with and beat a lot of our college and pro guys on strongman days every Friday if there were uneven numbers and I had to jump in to even the teams out.

I got up early, worked late, lifted heavy, ate big, drank three or four times a week and chased girls every single night. I was the biggest and strongest I ever was, single and loving every minute of it.

But eventually that life gets old.

And you grow up.

And you realize how important your health is.

So I slowed my roll and found myself with a renewed interest in nutrition and true healthy living. I thought long and hard about moving to Southern Cali since I had been wanting to live there for at least the previous ten years. It seemed like a great place to be to eat and live a truly healthy lifestyle.

Although chasing girls was starting to get old I figured life on the West Coast might renew my passion for it. I always told myself I’d never get married, but by thirty three I softened up to the idea that maybe I would, but definitely not until I was at least forty.

Then one day I got the bright idea to meet up with this girl for a drink. A friend told me I had a ton in common with her and since the bar scene was getting old maybe I would actually like this chick and wanna settle down.

“No chance,” I said. I put it off for a few weeks but then one night, for some odd reason, I decided to give it a shot.

So I met this girl named Jen at a local restaurant on a Thursday to grab a drink and chat. I already had my escape plan in action and told my friend to text me exactly an hour into it so I can say there’s an emergency and I have to go. We started talking and a few hours later I realized that we had a ton in common. For me to be interested in a girl they have to be very open minded and obsessed with training, nutrition, sports and music. A thorough knowledge of old school hip hop and a love for Pearl Jam is also a major plus. Since I figured that girl didn’t exist I accepted the fact that I would be single for a very, very long time.

But this one… There was something different about her. For the first time in a long time I found myself thinking, “I may actually like this girl.” Without even thinking I invited her to come into Brooklyn with a bunch of my friends on Saturday night to see a concert and she accepted.

That night in Brooklyn she hung out with six of my male friends and was totally cool. You take me out for the night with six girls I don’t know and I’ll be miiiiiiiserable. But she wasn’t. She was just like one of the guys. That was a big plus. And while we were hanging out before the show on my friends rooftop, she knew every song on my iPod. That was a HUGE plus.

Since I was kinda feelin this chick we hung out again on Sunday to watch the Giants game. At one point, during a commercial, she grabbed the TV remote.

“And just like that the potential relationship ends,” I though to myself. “Was she just pretending to be really into sports? Is the fact that she knows the name of every single member of the Giants and more about baseball than any male I know just some well rehearsed ploy to attract guys,” I wondered.

“She’s gonna put on Sex & the City or some bullshit like that, isn’t she? How could you be fooled so easily,” I asked myself.

So I immediately questioned her in a somewhat aggravated tone, “Uh… what are you doing?”

She said, “Oh, I just wanted to check the score of the Yankees game.”

I instantly got up off the couch, dropped down on one knee and proposed.

But three years later, after I realized that I’d found the best girl in the world and that my life couldn’t be any better, I did.

And so the day I never thought I’d see finally came.

What a difference a few years makes, huh?

Instead of going out boozing, partying and eating junk food I now stay home, cook healthy, organic food every night of the week (well, Jen does, I kinda just mosey around the kitchen pretending I’m helping), get to bed long before midnight and am far more productive on a daily basis. Having someone to share the healthy/fitness lifestyle with definitely makes things a lot easier and helps you stay on track. We keep each other motivated and focused and train together on a frequent basis.  My good friend, Craig Ballantyne always talks about the importance of social support when you’re trying to achieve something, and it doesn’t get any better than having it right in the same house next to you at all times. 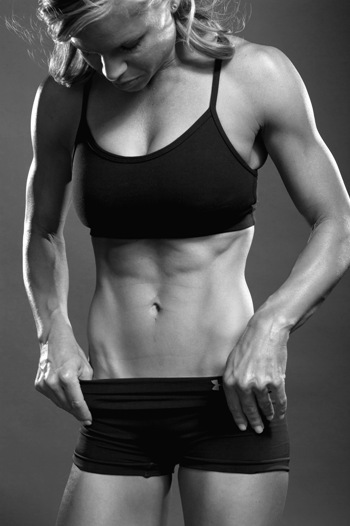 I think a lot more people would be able to get a lot closer to their goals if their significant others were on the same page and you made the whole thing more of a team effort. It’s definitely hard to eat and live healthy if the person you spend most of your time with is always eating chicken wings and Ho Ho’s or wants to go out dancing every night.

A long time ago, one of my early mentors in the Iron Game told me never to get in a relationship with a girl who wasn’t 100% into fitness and who wasn’t willing to accept and live the lifestyle. And he was right. Any relationship I was in that broke that rule never worked out.

So Big Tony’s advice to me is my piece of advice to you for the day.

Now I just gotta go figure out some way to string this engagement out another four years til I hit forty ;)

PS. The pics above are from a recent shoot Jen did with NYC photographer, Jay Sullivan. I think they came out great but would love to hear what you guys think. Drop a comment and let me and Jen know.