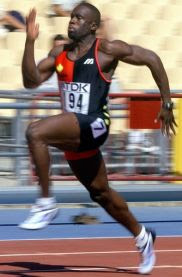 Today we have a guest article from my friend and well respected colleague, Patrick Beith. Patrick is a world renowned speed coach who many coaches including myself, turn to when they have speed training questions. He is also having a huge sale for my readers which ends at midnight tonight. Check it out HERE.

1. Static stretching prepares you to compete/practice

Static stretching actually reduces power output. Athletes should prepare for practice by doing a dynamic warm up that moves from basic, low intensity movements to faster, more explosive movements as the muscles loosen up. You want to simulate movements that athletes will go through in practice or a game. What happens when you try and stretch a cold rubber band? In a way, you can think about your muscles the same way.

This is a popular mindset with many female athletes that we have worked with. Simply look at some elite female athletes like Mia Hamm, Lisa Leslie, etc. These athletes certainly train with weights and no one would accuse them of having manly physiques. Strength training will improve performance and reduce injury if done correctly.

For some reason it is a popular belief that you are born with a certain amount of ‘speed’ and you can’t improve it. Nothing could be farther from the truth. Most young athletes are so physically weak and mechanically out of tune that significant improvements in speed can be made often just by working on technique and form. Athletes at any age and any level can improve speed when implementing a complete speed training program designed to improve and develop the entire athlete.

I don’t think coaches directly think this way, but their training implies otherwise. This is especially true in sports that involve a higher aerobic element such as soccer, field hockey, lacrosse, etc. I see kids out running mileage and doing long slow intervals of several minutes of continuous running. And this will get them in shape. But in games I see kids jogging, jogging and then sprinting at full speed for 20-30 yards, run, jog, sprint for 20-30 yards. If you want kids to improve their acceleration and top speed so they can get to the ball faster or get back on defense, then you have to train by running at full speed in practice.

5. You can train hard every day

The workout itself is only a piece of the training puzzle. It is the time between intense workouts, the recovery, where athletes make their improvements. And generally it takes 36-48 hours to recover from high intensity training. If athletes are doing too much, too often they become over trained. Coaches can expect to see an increase in injuries, kids complaining that they are sore more often, decreased performance, higher levels of fatigue earlier in games. It’s always better to under train an athlete than over train. Err on the side of caution to get maximal results.

6. Strength training will stunt a young athlete’s growth
This is another myth held over from a different time. On a daily basis, kids as young as 7 years old are playing organized sports year round, tackling, getting tackled, sliding, falling etc.. These loads on the body can have a much greater physical impact than a well designed strength training program. Though we don’t usually begin training with weights with pre pubescent athletes, they can benefit from body weight exercises such as push ups, lunges, sit ups, etc. This will increase muscular efficiency, speed up recovery, improve coordination and overall speed.

7. The harder the workout, the better the result

Some athletes (and coaches) have this mentality that if a workout doesn’t reduce them to complete exhaustion and/or make them vomit, that it wasn’t an effective workout. I can tell you that those who have this mentality probably see a lot of injuries and frustrating performances. The purpose of a workout is to stimulate an adaptation by the body. If the body is forced to do too much work in a given time period, it will break down. The skill in coaching is to stimulate the adaptation in the body, without reaching a point of diminishing returns.

8. Interval training is the same as speed training

Running repeat 100s, 200s, etc will not improve top speeds. Even running repeat 40s with short recovery will not improve acceleration and top speeds. Speed work is defined at 2-8 seconds of maximal intensity running with full recovery. That means at least 2 minutes of light dynamic movement between each effort. This goes against the experience of some coaches, but simply put, is the only way to improve speed. An athlete must be able to focus on proper form and maintain intensity in order to get faster. If they do not recover properly from each interval, they will not be able to replicate proper mechanics with consistency and they can not improve.

9. Flexibility won’t help you get faster

Both coaches and athletes spend so much time on the skills of their sport, speed training and conditioning that they often forget a fundamental component of success: flexibility. After practice or a game, the muscles are warm and loose. Now is the time to work on increasing flexibility. So many athletes suffer injuries or compete below their capacity because poor flexibility inhibits their range of motion and speed. We see this often in the hips and hip flexors where athletes’ stride length appears conspicuously short. Most often we see this in male athletes who will lift weights, train hard and then skip out on their cool down and flexibility work.

I hear so many parents and coaches yelling to their kids when they want them to run faster or when they are beginning to fatigue, “Lift your knees, Get your knees up”. This is one of the most backwards cues we can give to athletes. The way to run faster is to apply more force to the ground. Every action has an equal and opposite reaction, so the more force you apply to the ground, the more the ground will give back. So when we cue athletes to lift their knees we’re doing two things incorrectly. One, we’re telling them to use their hip flexors to lift instead of their glutes and hamstrings to drive down. Just think about the size of your hip flexor versus the size of the glutes and hamstrings. Now which muscles do you think can create more force and therefore more speed? Second, we’re cueing them to do learn a movement that is in opposition to what generates speed. If an athlete learns at age 7, to lift their knees when they need a burst of speed, that improper cue will be hardwired into their brain. To unlearn that as a teen and try to do the opposite and drive down, that athlete will have a difficult time coordinating an entirely new way of running and will potentially have to take a step or two backwards. That’s why it is critical to learn proper form early and get an advantage over those who still aren’t getting the best instruction. So cue athletes to step over the opposite knee and drive the foot down into the ground, with the foot landing underneath the hip.
**********

Don’t forget to take advantage of this limited time only sale, which ends at midnight, tonight and cash in on the huge savings Patrick and Latif are offering on their best selling speed training information products. I have and highly recommend them.

Click here to save big money and dramatically increase your speed right now!

The Way it Should Be Done
Sick of Your Gym?